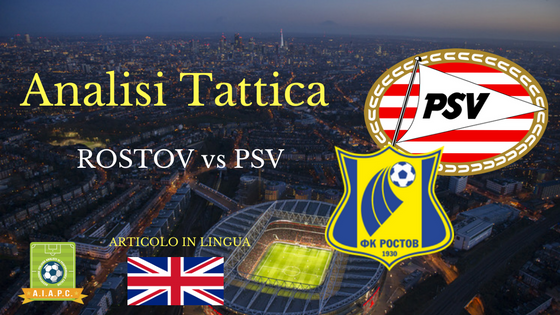 Philip Cocu showed awareness of Rostov incisive counterattacks as he preferred to play with mirror tactical scheme 5-3-2 (normally 3 CD variant is applied only against aggressive opponents like Atletico Madrid). Of course, both teams modified formations depending on game phase. Hosts were more in possession and tried to dictate the tempo. Erokhin and laterals moved up forming 3-4-3 during positional attacks. PSV often acted closer to their linear structure. Arias went high in attacks and Shwaab filled the right flank, so the shape could look like 4-4-2.

Hosts team was quite efficient in breaking PSV pressing with the help of defenders interaction. Dutches imposed numerical pressing only after losing the ball in high positions. In other cases PSV moved only 2-3 players towards the ball. The first half was characterized by support provided to defenders by holding midfielder Gackan. After the break he was seen higher up field together with Noboa, so trio of central defenders had to organize attacks on their own.

After Rostov laterals received the ball pair of forwards and Erokhin moved quick enough and offered diagonal channels for switching the play. Though PSV opted for tightening own lines, hosts offensive players found space, exploiting even short distances (5-10 meters) between opponents. It was obvious that Cocu team was not able to control the attacking approach of Rostov with their 3 central defenders – Russians demonstrated pace of position changes and regular switching the game from flank to the centre.

When Rostov was allowed to control the ball extensively sprints behind defence block were not so useful as was collecting second balls after challenges offensive players readily participated in. As usual, Rostov was rather active in counterattacks. The first half of the game was full of hosts attempts to run forward due to dropballs from Azmoun to Poloz who expected them in gear. Goalkeeper Dzhanaev sent the ball centrally, but these passes often led to early losses. Cocu surely analyzed Rostov rational minimalism in building quick attacks and PSV defensive block was ready to stop the opponent when Rostov counted on duels to be won by Azmoun or Poloz.

Anyway both goals were scored by hosts thanks to Azmoun skills in the air and Erokhin & Poloz filling the opponent’s holding zone on time. Pressing was used by Rostov, but if PSV made quick prolonged vertical passes with accuracy, the host team had to transit into deeper defence. And here appeared main issues. One of them was on the left side where Terentjev lost visibility of opponents in his zone. Partners were in 15-20 meters from him so it was really had to backup the left lateral.

Another problem occured in the central sector where Noboa did not mark PSV midfielders tight enough, so they got advantage on second balls. This was crucial because only Navas in the central axis fought well against L. de Jong, other central defenders (Mevlja and Granat who replace Bastos and Novoseltsev both sold – to Lazio and Zenit) suffered from tough manner of Dutch forward in challenges.

Rostov coped with leader’s role in the match – big step for the team with purely counterattacking reputation. During intervals when initiative was grabbed by PSV, Rostov minimized opponent’s possession advantage with tightness in the ball area. Russian team found out main weaknesses of PSV and used them with quality: mistakes in control during switch of the ball from flank into the middle, loss of players who drift between lines. What is worth noting is high level of conversion demonstrated by Rostov – 43% of shots (3 total) went on target brining 2 goals.

Rostov failed to save the winning score due to critical trends in positional defence. The left lateral Terentjev did not position himself properly, Noboa lacked control of opponent’s runs in the centre. Also both left-central and right-central defenders Granat and Mevlja who were signed just a month ago still struggle to feel the team mentality and are not so confident in interactions with partners.